Here’s how you can get started crypto mining today.

It’s absolutely inescapable at this point — the crypto revolution is upon us. It seems like just a year ago that Bitcoin (BTC) was an obscure tech thing that most average people didn’t concern themselves with. People passively knew what cryptocurrency was, but it wasn’t really hitting the mainstream quite like it is today.

Nowadays, you can’t look at your phone, tablet, or computer without coming across an article with “Bitcoin” in the title. And, especially in the past few months, alternative cryptocurrencies (referred to as altcoins) have gotten national attention as well. Who hasn’t heard of the massive growth that Ethereum (ETH) and Ripple (XRP) have been delivering?

As the power and utility — not to mention profitability — of digital coin investments become household topics, more and more people want to know about where cryptocurrency comes from.

You’ve probably heard of the concept of bitcoin mining, or just mining for cryptocurrencies in general.

What is cryptocurrency mining even about? Is it profitable, and is it something that regular people can even start doing?

What is Cryptocurrency Mining?

Cryptocurrencies, like Bitcoin, function pretty much in the same way that cash does. It is an exchange of value, its price compared to other currencies goes up and down with time, and you can transfer funds between two parties.

Digital currencies work in the same way, but unlike cash, crypto coins can be mined , more like gold or silver.

Not all cryptocurrencies can be, or need to be, mined , but a lot of big ones are.

Bitcoin (BTC), Ethereum (ETH) and Monero (XMR) are popular coins to mine.

Crypto mining doesn’t mean that there is an endless flow of each cryptocurrency that can forever be created just by mining.

The vast majority of crypto coins have a maximum number that can ever exist , a cap on how much can be mined.

Take a look at the Coin Market Cap.

Bitcoin, for example, will only ever have 21 million units in circulation.

That leaves, at the time of writing, less than 4 million left to be mined before it is maxed out.

Why Do People Mine Crypto Coins?

People have been mining crypto every day for years, and it has caused the total supply of each coin to grow.

Why are there people all over the world participating in this global mining effort?

What’s in it for them?

The answer to that question is more crypto.

Bitcoin mining, for example, rewards its participants with more Bitcoin.

Mining has been, and can be profitable — but times have changed.

For people who started mining Bitcoin early, had a higher chance of running a lucrative mining operation.

Bitcoin was founded back in 2009, and the mining game looks a lot different these days.

For one thing, it’s harder.

How Does Crypto Mining Work?

Miners are necessary for cryptocurrency transactions to be executed effectively and securely.

Traditionally, big banking institutions would take care of the delivery and verification of transactions, but the whole point of cryptocurrency is to get rid of banks as the middlemen.

With cryptocurrency, the distributed blockchain ledger takes care of the verification.

Verification of transactions, especially since everything is recorded on a public ledger, is probably the most important aspect of cryptocurrencies.

We need to trust in the payment systems before we trust or invest in them.

Miners run software to search around for the specific key that can unlock that box.

Once the key is found by their computer’s software, the whole box is unlocked , verifying all the transactions within.

That’s when the miner gets paid  and that’s when my neighbor finally gets his Bitcoin.

It sounds easy on paper, but their computers are actually trying to find a needle in a haystack, so to speak.

Can Anyone Mine Cryptocurrency? Do You Need to be a Tech Pro?

Mining takes a lot of time and initial investment to get the hardware set up, but it is not too complex for most people who can use popular apps.

A computer newbie could probably handle it, in fact.

You don’t need to be a digital genius to get into the basics.

WHAT YOU NEED FIRST

Coinbase Wallet: You will need to have a wallet address where the cryptocurrency that you earn through mining can be sent. ]

There are a lot of online cryptocurrency wallets you can choose from, but some have more stable and secure track records than others.

Mining Software: The software needed to mine crypto coins is free to download and use.

Bitcoin Miner, BTCMiner and CGMiner are all popular ones for Bitcoin mining, for example.

There are different software options for Linux, Microsoft Windows and Mac OS X.

Mining Hardware: This is where it gets tricky. You see, when Bitcoin mining first started, a regular PC was strong enough to handle it. Nowadays, however, mining BTC is much more difficult   and more complicated hardware called application-specific integrated circuits (ASIC) are being used.

These are machines that were designed just for mining — and they are powerful.

That is simply not accessible to most of us  and it would take a while to regenerate that investment.

Who just has that much money lying around to invest in mining hardware?

But, luckily, there is a way around this.

You can mine without shelling out tens of thousands for hardware.

It’s called cloud mining and all you have to do is lease the equipment with zero headaches!

Brett Hudson <<== connect with me on LinkedIn 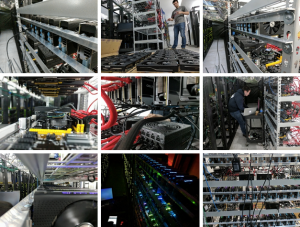